This letter on the left is dated 16 May 2001, from the Employment Relations Authority, after I had been punched in the face by Chairman of the Carterton Community Centre about a month earlier in response to legitimate queries regarding the gross malfeasance and fraud, bullying etc at the Centre, made in my capacity as elected Secretary and Finance Officer of the Centre: 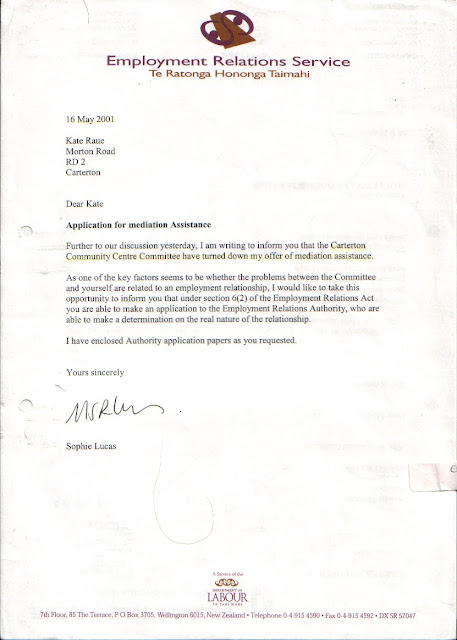 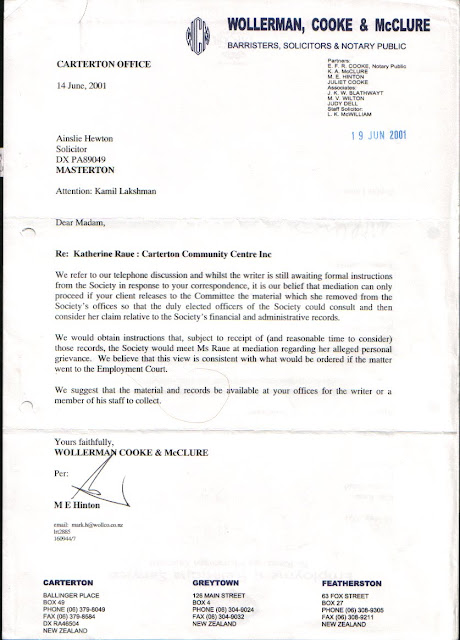 "Dear Kate,
Further to our discussion yesterday, I am writing to inform you that the Carterton Community Centre Committee have turned down my offer of mediation assistance.

The letter on the right is from Wollerman Cooke and McClure, the corrupt law firm who deliberately made the false complaint to police against regarding the Carterton Community Centre and it's assets - a complaint police soundly rejected after a thorough investigation. It's dated 14 June 2001, just a month later. It's addressed to my lawyer at the time, and it says:

We refer to our telephone conversation and while the writer is still awaiting formal instruction from the Society in response to your communication, it is our belief that mediation can only proceed if your client releases to the Committee the material which she removed from the Society's offices so that the duly elected Officers of the Society could consult and then consider her claim relative to the Society's financial and administrative records.

We would obtain instructions that, subject to receipt of, and reasonable time to consider those records), the Committee would meet Ms Raue at mediation regarding her alleged personal grievance. We believe this view is consistent with what would be ordered if the matter went to the Employment Court.

We suggest that the material and records be available at your offices, for the writer or a member of his staff to collect.
Yours faithfully
Mark Hinton"

What a joke! I instructed the lawyer, Ainslie Hewton (Kamil Lakshman), to instruct the writer forthwith that he was taking instructions from people who were not authorised to issue them and his letter would be treated with the contempt it deserved!


On the post titled "Police cover up for Georgina Beyer and their other mates" is a copy of a letter dated 11 June 2001 written by Snr Sgt Reid of the Masterton Police.On the second page of the letter it states that "on the 5th June a representative of the Carterton Community Centre (Elaine Brazendale) advised Senior Constable Wakefield that the Carterton Community Centre had declined to meet with Raue." More accurately, they declined to meet with, or even appoint, an auditor. Because of the FRAUD and gross malfeasance! This letter from Sgt Reid to Ainslie Hewton states (in response to Mark Hinton of Wollerman Cooke and McClure's accusation of theft against me):

The complaint has been investigated by Senior Constable Wakefield of the Carterton police.

Raue does not dispute possession of property belonging to the Carterton Community Centre.

Possession does not necessarily constitute theft, or any other offence.

In order to obtain a search warrant to seize property, police must establish that an offence punishable by imprisonment has been committed.

the police investigation has not established that Raue has stolen or fraudulently dealt with any of the property, therefore Police cannot obtain a search warrant to seize the property.

Kamil Lakshman, solicitor acting for Raue, has confirmed that Raue is taking legal action regarding personal and industrial disputes she has with the Carterton Community Centre and claims that the property is relevant to the disputes..

Lakshman has confirmed that Raue is willing to hand the property over to an independent person as opposed to the Carterton Community Centre.

On the 16th May 2001 the Mediation Service advised that the group who had taken over the Carterton Community Centre had turned down their offer of mediation assistance in the dispute regarding the Community Centre. This clearly makes a mockery of this letter from Wollerman Cooke and McClure above, dated 14 June, a month later, doesn't it!

The so-called "duly elected officers of the Society" were not legally elected at all, they simply appointed themselves, at a meeting they had in May, without a quorum of committee members -- they had no authority whatsoever regarding the Centre or its funds, assets or affairs, which they took control of illegally. At another meeting in May the group falsely claiming they were the 'committee' recorded in the Minutes a motion was passed to appoint RG Thompson of Masterton auditor. Mr Thompson indicated a view consistent with that of the lawyers who found there was fraud and gross misfeasance committed by the group, so the audit was abruptly cancelled by Councillor Jull Greathead! Contrary to the claims of Georgina Beyer, Gary McPhee, and others, the financial records and affairs of the Carterton Community Centre and the ten organisations it was administering have NEVER been audited because of the blatant fraud.

Councillor Bill Knowles accused me of theft of the records and claimed that to be the reason no audit took place - this is a lie. Sleazy Constable Wakefield came to my home and demanded them and I told him I would meet the unlawfully 'elected' committee at the office of any auditor they cared to name and we could all hand over the information we held to the auditor, because as Knowles knows perfectly well, copies of every single piece of information I have are still in the possession of the 'committee' and always have been!

The letter from Sgt Reid makes it perfectly clear that the claims made by Wollerman Cooke and McClure are a deliberate attempt to pervert the course of justice and an insult to the intelligence!

What kind of so-called community representatives refuse mediation, and refuse an audit? People who refuse mediation and audits should not be on the Council, or in any other role in the community. Let them go and try and get a real job in the real world, it's time for these incompetent and corrupt 'professional politicians' to get their snouts out of the tax payer funded trough and stop thieving.

Posted by Transparency in New Zealand, Kiwileaks. at 1:01 AM