Point of Order Protest at Supreme Court and Parliament calls for Transparency in New Zealand Courts and public affairs:

The inaugural Point of Order Protest was held on 13 June 2013, beginning outside the Supreme Court in Wellington and progressing to Parliament.
Protestors led by publisher Vince Siemer of Kiwisfirst  united in Wellington today in solidarity with Transparency NZ, NZ Justice Forum, the NZ Private Prosecution Service, and a number of other individuals and representatives of various organisations concerned with human rights abuses, injustice in the Courts, etc, and demanded accountability, fair access to justice, transparent Courts, transparency regarding public affairs, and governance by the people and for the people, with fair elections and access to fair justice for all - rather than only the well off.  The Courthouse itself cost over $80,000,000 of taxpayer's money to build, it replaces New Zealanders' access to the Privy Council, which cost us nothing. 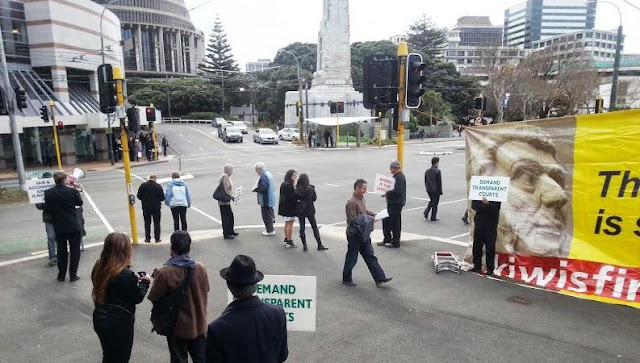 While Transparency International's NZ chapter is well 'incentivised' to come up with their "reports" which spread the propaganda that there is no corruption in New Zealand - or indeed the wider Pacific - the evidence tells another story - the National Business Review reports there is an alarming amount of bribery in New Zealand.  Vince Siemer and Kate Raue are only two of the many people who have been corruptly bullied by taxpayer funded Courts, Judges, lawyers, amicus curiae, Court appointed 'forensic staff', psychologists and psychiatricts and other purveyors of quackery who quaff at the great trough that is our ironically named 'justice' system, a system which is totally dysfunctional and prejudiced and biased in favour of the wealthy, including recent widely criticised changes to the legislation resulting in extremely restrictive access to legal aid.  Others protesting included Maria Van Der Meel of The City is Ours - protesting in particular to the manner in which the Council are dealing with issues regarding the bus lanes in Wellington and in particular Manners Mall - several people have been killed or seriously injured now, including Venessa Green, who was struck and killed by a bus in Willis St recently, as well as representatives of the Wellington Private Prosecution Service, and several independent journalists.
The processes for complaints through the established agencies are widely recognised as being inefficient because of incompetent and corrupt 'investigators', often ex Police officers, who've 'perfed' out of the force rather than face disciplinary action, such as Jon Moss and his mates at the REAA.  The Ombudsmen's Office, the IPCA, the Privacy Commissioner and Health and Disability Commissioner are all dysfunctional, incompetent, and often corrupt, which has led to a situation where there is a massive backlog of complaints and the only option for the victims is the Courts, which is what led to the overload of the legal aid applications and the changes to curtail access to legal aid.
Thanks to Simon Powers' widely criticised changes to the legal aid system, people no longer have access to lawyers unless they've got lots of money, these changes were slammed in a recent decision from the Court of Appeal, Criminal Bar Association v Attorney General.  The irony is, that the Criminal Bar Association represents the lawyers whose money tree was being pruned, rather than the public interest, and lawyers are still refusing to take clients unless the clients have the means to pay huge legal bills.  The same thing is happening in Europe where lawyers are protesting similar changes.  The decision of the Criminal Bar Association v Attorney General contains the words


"But the issue is not what is desirable as a matter of sound public administration, but what is lawful."

Vince Siemer was party to this little exchange in the Auckland High Court on 17 June 2008:


Judge Lester Chisholm:  "Mr Siemer, if we find that you have broken the law will you change your ways?

Mr Siemer:  "What law have I broken?"

Judge Chisholm:   "That is for us to decide."

Mr Siemer:  "What law is it said that I've broken?"

Judge Chisholm:   "Mr Siemer, I'm not going to get into a debate with you."


"Mr Siemer:  Is this proceeding being recorded as I requested?
Judge Rhys Harrison:  Why do you want it recorded?
Mr Siemer:  Is this not a 'Court of record'?
Judge Harrison:  'Court of record' was a phrase coined many, many centuries ago, before recording devices came into existence, so it has nothing to do with 'accurate record of proceedings'.  So, no, there is no need to record, thank you." 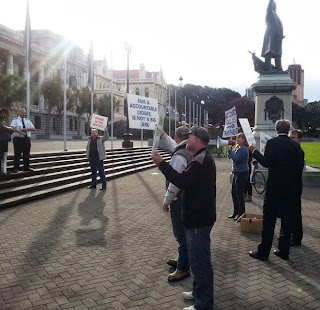 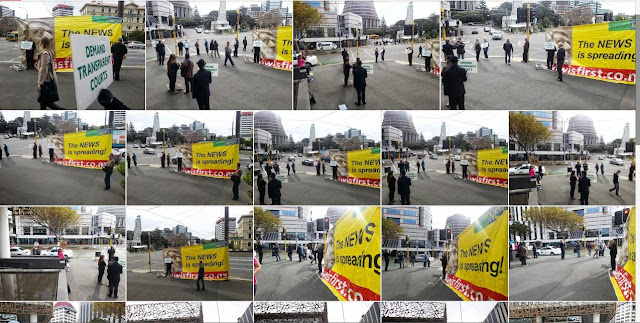 (Police bosses, including the Minister, initially lied, claiming that Police didn't receive any incentive or discount from McDonalds, until it was revealed that they in fact did receive a discount at McDonalds, in total contradiction of police regulations.)  Our police force has becoming a private army for corporate and political interests, and our Courts are acting increasingly in a manner which is not in the public interest and not in the interests of justice.

And now the government is forcing through even MORE legislation making it illegal to strike.
Posted by Transparency in New Zealand, Kiwileaks. at 9:59 PM No comments:

The Australian Goods and Services Tax Act 1999 is a hefty piece of legislation to try and make your way through, but it's well worth it when you arrive at section 165.55, which states the following example of creative use of the Queen's English:

[The] "Commissioner may disregard scheme in making declarations.

For the purposes of making a declaration under this Subdivision, the Commissioner may:

(a)  treat a particular event that actually happened as not having happened; and

(b)  treat a particular event that did not actually happen as having happened and, if appropriate, treat the event as:

(c)  treat a particular event that actually happened as:

(i)  having happened at a time different from the time it actually happened; or
(ii)  having involved particular action by a particular entity (whether or not the event actually involved any action by that entity)."

This is not unlike the recent decision of the NZ Court of Appeal in the matter of Criminal Bar Association v Attorney General in which the Honourable Judge uttered this:

"But the issue is not what is desirable as a matter of sound public administration, but what is lawful."

Posted by Transparency in New Zealand, Kiwileaks. at 8:02 PM No comments: