Wilful abuse of process by the Ministry of Social Development:

A recent Minute issued by the Social Security Appeals Authority is scathing in its criticism of the Ministry of Social Development.  In fact, it is so scathing that it is hard to imagine a more damning indictment of a government department.

In addition to the recent reported criticisms regarding the numerous breaches of privacy of their clients, a recent Minute from the Social Security Appeals Authority shows that the Ministry has recently been severely criticised by the SSAA regarding its habit of using fake names for its Benefit Review Committee members since at least 2015.

Likewise, the principles of open and natural justice require judges to be real people and use real names, and the idea of secret court processes and secret judges is entirely repugnant, and demonstrates a damning lack of integrity, and most concerning arrogance by the Ministry in this blatant abuse of process.

The Social Security Appeals authority has described it as an abuse of process in their Minute, and ordered the Ministry to provide the 'memo' which was sent "in confidence" to the Authority to be provided to the plaintiff, and be brought to the attention of the Chief Executive.

The actions of the Ministry are outrageous, as the Minute from the Authority confirms, and that the arrogance which is evident in Mr Van Ooyens actions is most concerning in light of the fact that the Ministry was warned against the practise over two years ago.

Article 14 of the International Covenant on Civil and Political Rights forbids the use of secret courts and faceless judges.

"In confidence" seems to stand for the fact that the Ministry is confident it can get away with this sort of blatant abuse of process on a regular basis, particularly as they were warned against it over two years ago, simply ignored the warning and continued in confidence that the warning didn't apply to them for some reason" says Mrs Raue.  "It would appear that all clients who have unwittingly been judged by Benefit Review Committee members using fake names are entitled to a rehearing and the NZ Beneficiaries and Unemployed Workers Union and Transparency NZ are writing to the Minister and the Chief Executive to ensure that those people are identified, notified, and facilitated.

We also commend the work done by Mr Graham Howell of the Wellington Benefit Rights Service for assisting the client in this case, and the new Chairman of the Social Security Appeals Authority."
Transparency New Zealand is writing to the United Nations about this matter and will assist the plaintiff in taking further action regarding the actions of the Ministry.

The plaintiff has been the victim of a campaign of bullying by Ministry of Social Development spanning many years, and has suffered extreme hardship as a result.  This Minute vindicates her and confirms what she has been saying all along.

This matter also raises a number of questions about access to justice and human rights, and the implications are wide ranging, including the questions about how many other MSD Remote Client Unit review decisions include false names of the committee members.  It seems every one of them is entitled to a rehearing.

Here is the Minute.  The name of the appellant has been redacted - but only for the time being.  Click on the images to view, and click "ctrl" key and "+" key simultaneously to enlarge the images, a direct link to the pdf file can be accessed here. 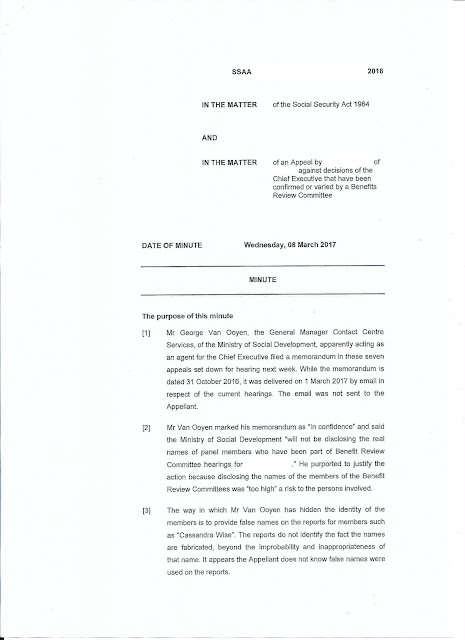 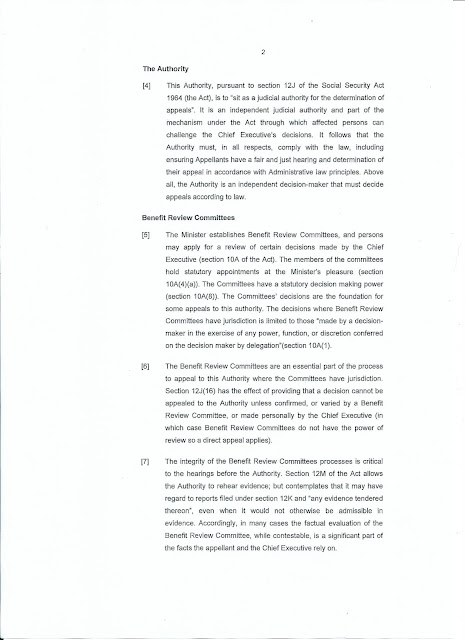 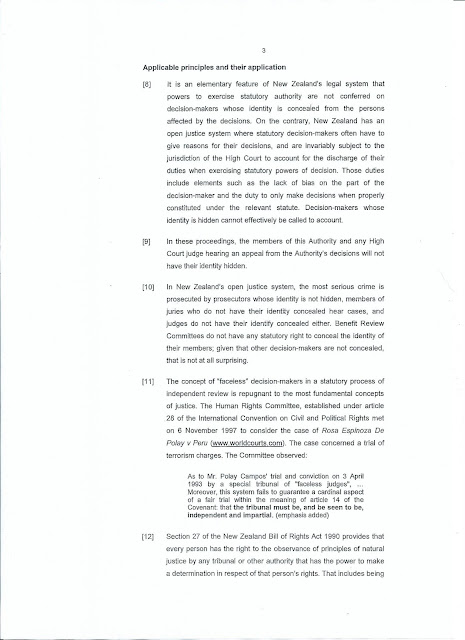 Here's where it starts getting really interesting.  "It is difficult to imagine a more effective way of undermining public confidence in the independence of the Authority than for it to acquiesce in the Chief Executive's delegate's actions."  Indeed it is. 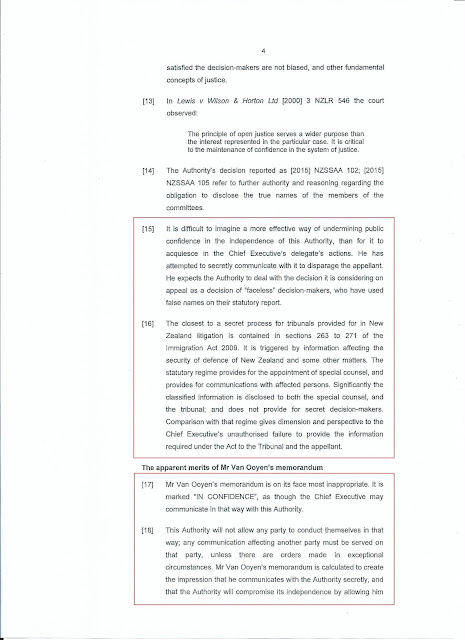 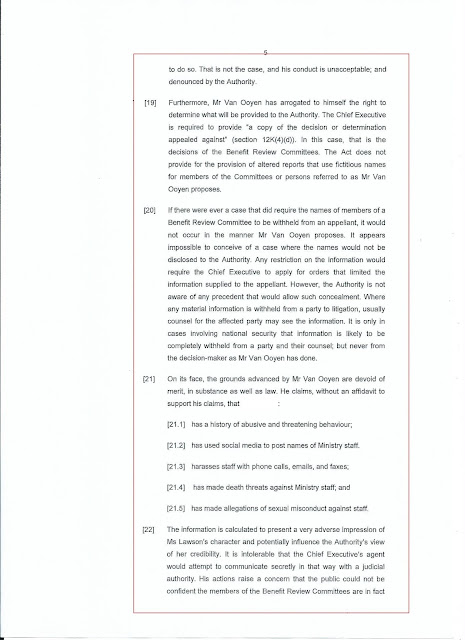 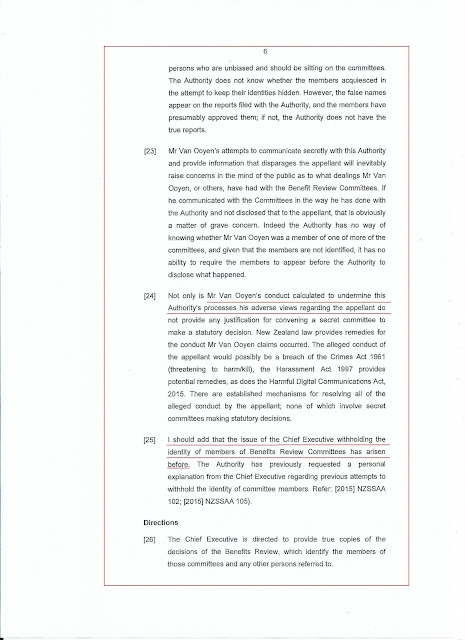 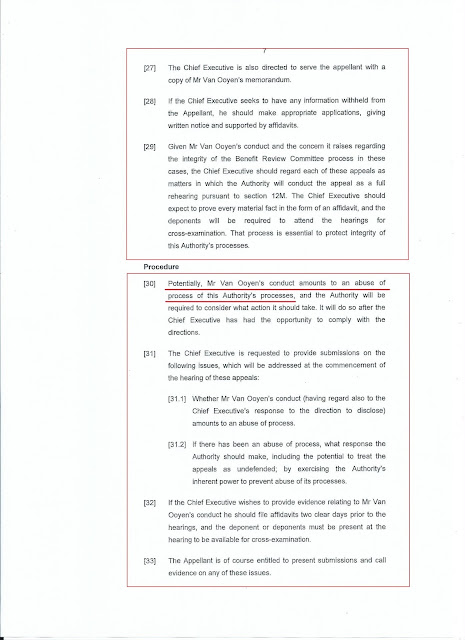 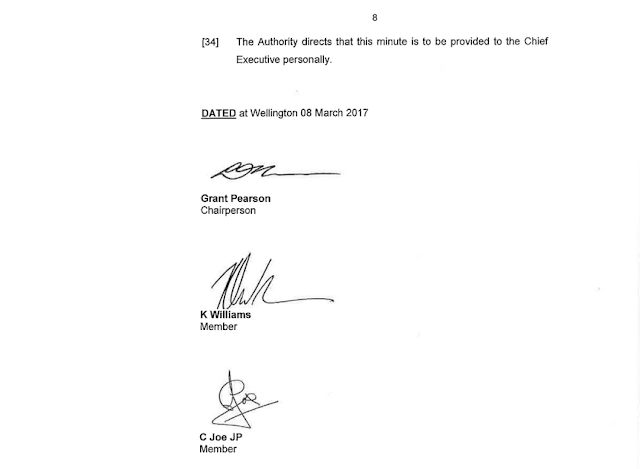 Posted by Transparency in New Zealand, Kiwileaks. at 3:31 PM

19 May 2010. The damning report into the systemic failure of the New Zealand Police to investigate child abuse allegations has just been released by the so called Independent Police Complaints Authority. It says what I have been saying since 1996. New Zealand, and the Wairarapa in particular, have absolutely unacceptable rates of child abuse, suicide, violence and other crime.
New Zealand is one of the most dangerous places in the world for a child to grow up. We're building this site because we are sick of listening to journalists facilitate the opinionated chattering of idiots like Georgina Beyer and Christine Rankin, with their little programs and organisations, with little gimmicks like tying white ribbons everywhere and stating the obvious, while they maintain the problem because it keeps them in a job.
I made a complaint of child abuse against a man who came to my home and threatened me several times, finally smashing the door in and seriously assaulted me while horrified witnesses looked on. Corrupt local Constables have refused to charge the attackers in spite of all the evidence, like they refused to charge corrupt local bully Gary McPhee and his mate with the drunken violent home invasion and assault they boasted about in the "news" paper - The Wairarapa Times-Age prints propaganda, not news. We are publishing the truth. Corrupt local Constable Peter Cunningham is now prosecuting me for perverting the course of justice and escaping custody.
These charges follow around thirty or more other charges filed against me by Police since I moved to the Wairarapa and began questioning the so called 'election' of Georgina Beyer, Gary McPhee and others. To date I have been acquitted of 99% of those charges, the remainder are under appeal.
The charges came up before Judge Behrens on 8th December and it was revealed that Constable Laura Rhymer, who will obviously commit perjury if she tries to state on oath the lies in her written statements - exactly like the defended hearings on the five charges arising from the public meeting were thrown out after it became obvious that the officer in charge of the case was going to commit obvious perjury - applied for leave two working days before the trial when she found out that it would be heard by Judge Behrens, QC, who is the same Judge who threw out the five other corruptly laid charges.
Update - Constable Laura Rhymer did attempt to lie in Court during the application for evidence to be accepted without cross examination under the since repealed section 344A of the Crimes Act regarding challenges to the admissibility of evidence.
Corrupt parties then conspired to unlawfully detain me in a high security mental asylum on the grounds that they thought I was 'suffering from Delusional Disorder' for criticising Police, Georgina Beyer, Gary McPhee, etc. The documented treatment plan ordered that I be given no writing materials, was allowed no visitors, mail or phone calls, and staff were forbidden from sending communications from me, photocopying documents, etc. Under these conditions I was expected to prepare my defense on the remaining charge of perverting the course of justice.
I obtained a pen and paper from the other inmates, and wrote a nineteen page application for judicial inquiry under section 84 of the Mental Health Act and the High Court Rules and it was smuggled out and delivered with the assistance of the other inmates.
Suddenly, few days before the trial was due to begin on the charge of perverting the course of justice, the Crown prosecutor announced that the Crown would be offering no evidence against me.
There was never any evidence in the first place.