There are at least three washing machines in the average home these days: the dishwasher to wash the dishes, the one in the laundry that washes the clothes and things, and the brainwashing machine, the television.

'Kiwis' sit in front of the brainwashing machine watching the fluff and nonsense that it emits, night after night - and all day in some cases - all funded by the advertising and entertainment industry and political lobbyists, masquerading as "the media".  Mediating between the public and reality.  The average 'kiwi' would have no idea who Joel Benjamin is.

He made this film on a budget of $4,000 and I don't see any evidence that any of that came from Te Mangai Paho.

Posted by Transparency in New Zealand, Kiwileaks. at 2:02 PM No comments:

The full transcription of the communications between Ms Lawson and myself is reproduced in its entirety below IN THE INTERESTS OF JUSTICE.

The first message relates to this news report. which was published after journalists contacted me regarding an Official Information Act request I had made. 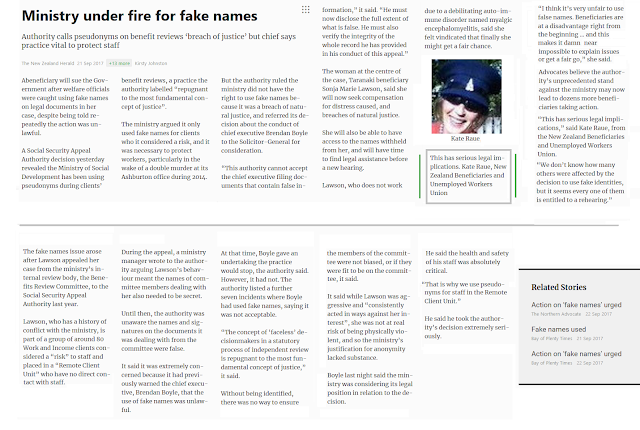 On 13 March 2019 Ms Lawson sent me the following text messages:

Tony Ellis and Seth Fraser are two lawyers who were involved with Ms Lawson.

Brian Hunter is a serial fraudster with over 200 convictions for dishonesty, fraud, and similar offences.

Ten days later I sent her this message, referring to two OTHER lawyers, who had successfully sued serial fraudster Brian Hunter for defamation:

Here is her response:

Then more requests about her previous lawyers:

Then another specific reference to Brian Hunter, in regard to Hunter working as IT consultant and working for lawyer and "nailing Hunter further".

"If I have copy of these documents I can nail Brian Hunter & I would say both Seth Fraser & Tony Ellis will be in crap too as I have documents that proves they all told lies and were going to submit false information in court of law."

"If I have copy of these documents I can nail Brian Hunter & I would say both Seth Fraser & Tony Ellis will be in crap too as I have documents that proves they all told lies and were going to submit false information in court of law."  Ms Lawson knew that Brian Hunter was running Wellington lawyer Chris Tennet's office and was closely involved with lawyer Seth Fraser, and that I and others had made complaints to the Law Society about Tennet, Fraser and Hunter.

I knew that Brian Hunter was co-claimant, along with Sonja Lawson in a Court case regarding the Ministry of Social Development using fake names in Court proceedings.  Brian Hunter knew that Sonja Lawson was one of our clients and was sending me information about these matters, which is why he initiated communications with me in the first place.

Copied below are two emails sent to me by Sonja Lawson in September 2017, the first one which contained an attachment titled "FINAL DRAFT statement of claim": 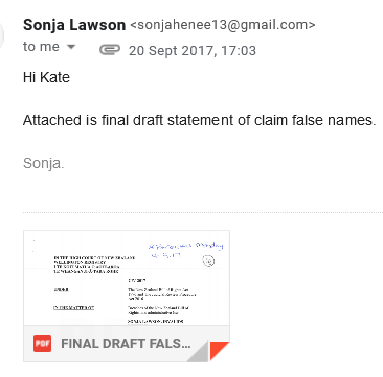 At around the same time she sent me this email from her to lawyer Seth Fraser showing that she was well aware that she had a co-claimant, "Brian Noel Hunter" alias Brian Damien Hunter, a serial fraudster.  As soon as I read the statement of claim, and the link contained therein to a website run by BRC member Ross Miller, titled "No Minister", and other information such as decisions of the Social Security Appeals Authority that related to Brian Hunter, I realised that the comments on that website link by "Noel" were in fact made by Brian Damien Hunter, and that Brian DAMIEN Hunter was Sonja Lawson's co-claimant, and that Brian Noel Hunter was an alias used by serial fraudster Brian Damien Hunter.

The next message from Sonja Lawson stated that she had "documents that proves they all told lies & were going to submit false information in court of law." [sic).

I requested that she email me these documents that proved they were going to submit false documents in Court because they related to the complaints to the Law Society about Hunter and Fraser.

Ms Lawson replied with yet another reference to Brian Hunter- the seventh such reference so far I think, and why this is important is because, ironically, in the many sworn affidavits which Ms Lawson submitted to the Court (copied below for evidential purposed in the interests of justice) she claimed to have no knowledge whatsoever, or interest in, Brian Hunter - despite all these text messages SPECIFICALLY mentioning him and the evidence of the joint statement of claim which she had emailed to me two years earlier:


There is nothing offensive about my responses whatsoever, they were totally appropriate under the circumstances, I encouraged her to provide the information she said she had to the Law Society and Police:


Eighth and ninth references to Brian Hunter by Sonja Lawson, quite interesting response to the advice regarding her claims regarding her alleged "evidence" about Brian Hunter and the lawyers - this confirms that Sonja was very well aware of the joint claim involving her and Brian Hunter - which is further evidenced by the fact that her own handwritten notation is clearly marked on the statement of claim:
Here is the document bearing Sonja Lawson's notation in the top right hand corner showing that she has been well aware of the existence of all eight pages of this document since Monday 4-9-2019: 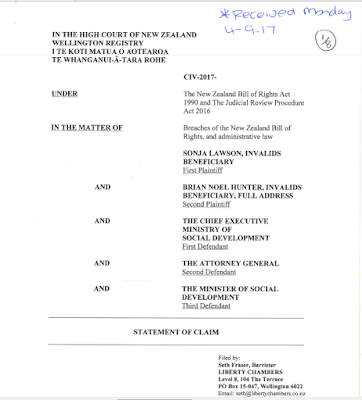 Sonja obsesses about Brian Hunter a bit more here - despite her swearing on oath she's never heard of him and never begged me for information about him - the tenth and eleventh time she has specifically referred to him by name in this exchange of messages that she has initiated:


Refers to Hunter for the twelfth and thirteenth time:


"I don't know what u r talking about" blah blah blah - by now I was beginning to lose patience somewhat with her obfuscation and dishonesty:

Quarter to two in the morning, still at it:

Blah blah blah:
Again, nothing wrong with my response.  Unlike the increasingly erratic diatribe reproduced above:
"Stop wasting my time with these ridiculous texts":

On about Brian Hunter again - that's 15 times she has mentioned him, at least:

Sixteenth and seventeenth time she goes on about Brian Hunter:
Blah blah blah:

"Stop wasting everyone's time"
"Brian Hunter was named on drafts and mentioned in engagement letter."  Further confirming that Sonja Lawson knew perfectly well that Brian Hunter was intimately involved in her matters and the involvement of lawyer Seth Fraser -  References 18 and 19 - Sonja claims that she already knew this because it was mentioned on the engagement letter :
"Stop this nonsense!!!"
Blah blah blah - "Full up with legal stuff so I have no issue with not txting so thats it"
"That's it" - except she just can't quit:  Blah blah blah:

Blah blah blah on and on and on - this is a step too far.  I did not contact her at all on 14th and this message sent to me on the 15th contains false allegations and is totally unnecessary and unwanted, and deeply indicative of Ms Lawson's obsessional nature:
Blah blah blah:
Blah blah blah - has to have the last word:

Like a little child.  Pathetic.  I hadn't contacted her since the previous day.

Sonja Lawson has just filed the following statements in Court in the form of sworn affidavits.  These statements are lies, Sonja Lawson knows they are lies, and if she tries to give evidence to this effect she will be liable for prosecution for perjury.

After begging for information about her dodgy co-claimant Brian Hunter the serial conman, Ms Lawson is now trying to claim that she's never heard of him and has no interest in him whatsoever and knows nothing about this document - a claim in which Ms Lawson and Mr Hunter are cited as co-claimants (below) - with her name on it, and her handwriting clearly on it: 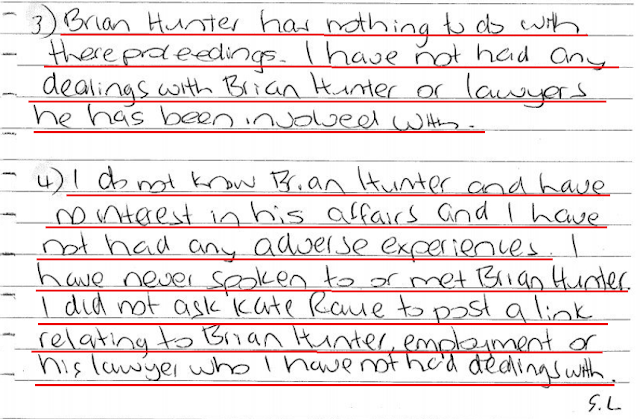 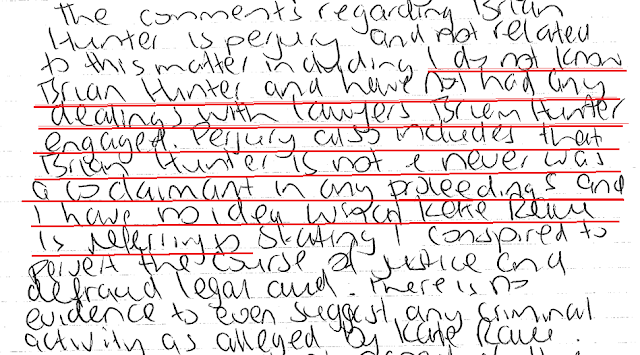 This is her own handwriting on this document - the handwriting matches every other document she's filed in Court, and the affidavits claiming that she doesn't know him constitute DELIBERATE PERJURY: 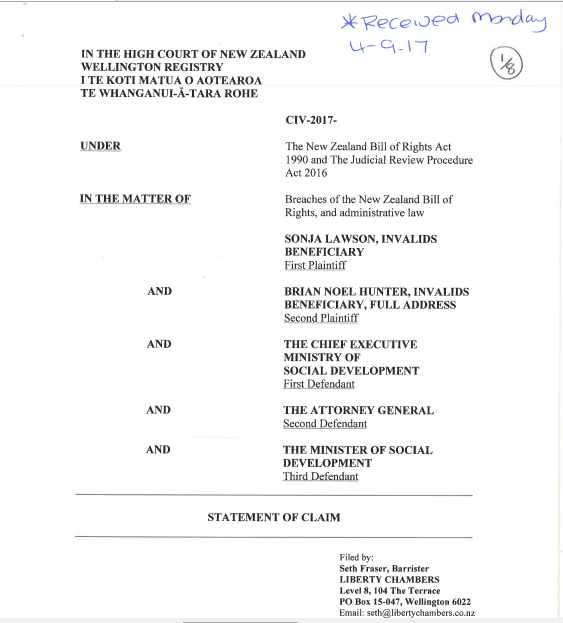 Posted by Transparency in New Zealand, Kiwileaks. at 4:38 AM No comments:

19 May 2010. The damning report into the systemic failure of the New Zealand Police to investigate child abuse allegations has just been released by the so called Independent Police Complaints Authority. It says what I have been saying since 1996. New Zealand, and the Wairarapa in particular, have absolutely unacceptable rates of child abuse, suicide, violence and other crime.
New Zealand is one of the most dangerous places in the world for a child to grow up. We're building this site because we are sick of listening to journalists facilitate the opinionated chattering of idiots like Georgina Beyer and Christine Rankin, with their little programs and organisations, with little gimmicks like tying white ribbons everywhere and stating the obvious, while they maintain the problem because it keeps them in a job.
I made a complaint of child abuse against a man who came to my home and threatened me several times, finally smashing the door in and seriously assaulted me while horrified witnesses looked on. Corrupt local Constables have refused to charge the attackers in spite of all the evidence, like they refused to charge corrupt local bully Gary McPhee and his mate with the drunken violent home invasion and assault they boasted about in the "news" paper - The Wairarapa Times-Age prints propaganda, not news. We are publishing the truth. Corrupt local Constable Peter Cunningham is now prosecuting me for perverting the course of justice and escaping custody.
These charges follow around thirty or more other charges filed against me by Police since I moved to the Wairarapa and began questioning the so called 'election' of Georgina Beyer, Gary McPhee and others. To date I have been acquitted of 99% of those charges, the remainder are under appeal.
The charges came up before Judge Behrens on 8th December and it was revealed that Constable Laura Rhymer, who will obviously commit perjury if she tries to state on oath the lies in her written statements - exactly like the defended hearings on the five charges arising from the public meeting were thrown out after it became obvious that the officer in charge of the case was going to commit obvious perjury - applied for leave two working days before the trial when she found out that it would be heard by Judge Behrens, QC, who is the same Judge who threw out the five other corruptly laid charges.
Update - Constable Laura Rhymer did attempt to lie in Court during the application for evidence to be accepted without cross examination under the since repealed section 344A of the Crimes Act regarding challenges to the admissibility of evidence.
Corrupt parties then conspired to unlawfully detain me in a high security mental asylum on the grounds that they thought I was 'suffering from Delusional Disorder' for criticising Police, Georgina Beyer, Gary McPhee, etc. The documented treatment plan ordered that I be given no writing materials, was allowed no visitors, mail or phone calls, and staff were forbidden from sending communications from me, photocopying documents, etc. Under these conditions I was expected to prepare my defense on the remaining charge of perverting the course of justice.
I obtained a pen and paper from the other inmates, and wrote a nineteen page application for judicial inquiry under section 84 of the Mental Health Act and the High Court Rules and it was smuggled out and delivered with the assistance of the other inmates.
Suddenly, few days before the trial was due to begin on the charge of perverting the course of justice, the Crown prosecutor announced that the Crown would be offering no evidence against me.
There was never any evidence in the first place.